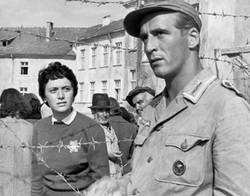 English title, Stars. This 1959 East German film set in a small Bulgarian village during World War II concerns the tentative and doomed relationship between "Walter", a conscience-stricken German corporal, and Ruth, a Greek Jew imprisoned in the nearby concentration camp.