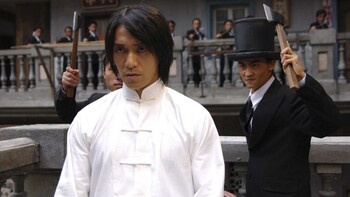 The good guy is the one in white.
Advertisement:

In Western culture, the color white is symbolically tied to goodness. Tropes like Black-and-White Morality and White Magic exemplify how "white" is used as a synonym for "good". So ingrained is this concept that good characters in fiction tend to dress in white, usually while opposing a black-clad foe.

In The Western, the good guy wears a white cowboy hat. Prince Charming rides in to save the Damsel in Distress on a white horse. And Good witches wear white to show they're not a Wicked Witch. Heroic and morally righteous characters everywhere tend to wear white.

This trope is nearly ubiquitous in the West, but it's become increasingly popular to subvert expectations by playing with the trope. It's also not common to the same extent in every culture, such as East Asia where white is associated with death and occasionally villainy. As such, do not list aversions.

Overlaps with Good Colors, Evil Colors when paired with a black-clad villain. Compare Blue Is Heroic, Red Is Heroic, Pink Heroine, and Primary-Color Champion for other good color schemes.