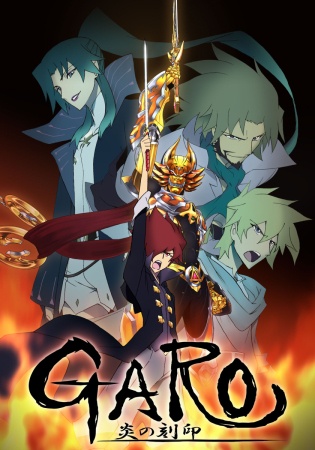 GARO: The Animation (known in Japanese as GARO: Honoo no Kokuin lit. GARO: The Carved Seal of Flames) is a dark fantasy anime series and the first animated entry in the GARO franchise, animated by MAPPA and written by Yasuko Kobayashi, and part of the Fall 2014 Anime line-up.

In a medieval European kingdom called Variante, a woman accused of witchcraft is burnt at the stake, but not before she can give birth to a child mysteriously shielded from the flames. A man clad in silver armor emerges from the palace and whisks the child to safety before the magic protecting it can wear off. The High Priest and Royal Adviser, Mendoza, who blames the witch and her people for the king's poor health, launches an extermination war against her people: The Makai Knights and Makai Priests. These magic wielders are all systematically hunted down, captured, tortured and killed. The people of the Church claim that this was a righteous extermination of demons. What the people do not know is that the people who were killed were a clan of warriors dedicated to sealing the true demons known as Horrors.

Over a decade later, virtually all of the Makai have been eliminated; the few who remain have secluded themselves from society and live in hiding. Two of them, however, still actively follow their duty of eliminating Horrors: GARO and ZORO. Every Makai Knight wields magical suits of armor and immense power. One of whom is Germán Luís, who holds the title of ZORO, the knight who rescued the baby from the flames. The infant turns out to be his son. The baby, now a young man and the current holder of GARO, is León Luís. León and his father embark on a journey to seek out their surviving allies, eliminate the Horrors, and exact revenge on those who hunted them to near-extinction.

A movie sequel GARO: Divine Flame with the same characters has been released.