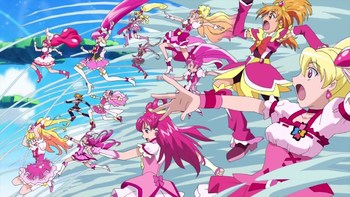 Having been influenced by Sentai, many Magical Girl shows are Color-Coded for Your Convenience. And in these shows the protagonist and/or leader of the team is often the one in pink.

For a character to fall under this trope, they must meet two requirements:

There's usually a good chance this character will have a Heart Beat-Down or Petal Power attack.

This trope often crosses over with Rose-Haired Sweetie and Princess Protagonist.

A Sub-Trope of Red Is Heroic and Pink Means Feminine.