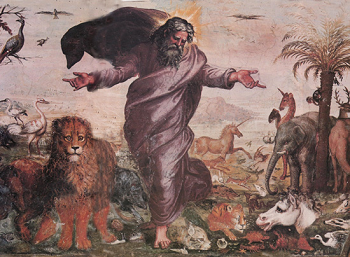 The man upstairs is a pretty cool guy.

He wants people to be happy and for good to triumph over evil, and isn't afraid of anything. His power is not based on people liking him or a hidden plan to extract the tears of mortals. If God permits evil, it is because He respects people enough to let them make their own mistakes, and deal with the consequences of their actions, rather than evil for its own sake. If a hero is pious and noble, repentant if it concerns an anti hero, or if the evil cannot be contained by mortal agents, sometimes divine intervention actually happens, no strings attached.

This may or may not be result in a Deus ex Machina depending upon whether God, or agents of God, finish the villains themselves and whether they're established characters or not. If they do not end the battle themselves, they will provide the supernatural power-ups, Holy Hand Grenade or Infinity +1 Sword to the hero in order to save the day. This is the opposite of Have You Seen My God?, and tends to go hand-in-hand with Light Is Good.

If this concerns an Anti-Hero or unbeliever, the prayer typically begins, "Please, God, if you're there..." This is especially poignant if the character had previously gone on a massive Rage Against the Heavens rant, or is a Hollywood Atheist. Perhaps their current condition isn't the fault of God, but rather from their own faults, the negative consequences of their own actions, or the actions of others.

For dramatic reasons, characters may avoid turning to God until they've exhausted every other possible recourse: Prayer Is a Last Resort. (Bonus points if the prayer includes the line, "God, I'm not really a praying man, but...") This can be used to underscore how desperate the situation really is, and also to avoid any too-convenient Divine Interventions. More pious folks may still consider this to be unsatisfying; after all, if there's really an omnipotent Big Good who's willing to give you supernatural assistance when you ask, why wouldn't you ask right away?

Unanswered prayers may lead to a Crisis of Faith if the characters dwell too much on the age-old question of why a good God allows evil. A possible answer may be that, although He's good, God Is Flawed. It could also be that He prefers to leave people's decisions up to them, even though that results in The Evils of Free Will. Maybe it's just that He's working In Mysterious Ways or that Helping Would Be Kill Stealing. On the other hand, if a character is just upset that God isn't making things go well for them personally, they may be Egocentrically Religious.

Conversely, this can easily overlap with Good Is Not Soft and Good Is Not Nice, since being good usually involves taking a dim view of evil. Thus a good God would certainly not be above making sure sinners receive their due comeuppance. Then again, the element of All-Loving Hero is equally likely to mean God is good enough to find the good in even the worst people and show they’re not beyond redemption. What can we say but God works In Mysterious Ways?

Compare God of Good, which overlaps (since, in monotheistic religions, He is this also). This trope also frequently overlaps with Grandpa God, since a kind old man is a good shorthand for wisdom and fatherly concern. This is the guy that the Good Shepherd and The Paladin work for. The Missionary spends his time Walking the Earth and telling people about this trope. Compare Everybody Loves Zeus, where light and heaven-based gods not traditionally good and pure are portrayed as such in adaptation. Compare Jesus Was Way Cool for when The Son gets good ink specifically. It can also include God working In Mysterious Ways, since if He hasn't directly shown Himself before, chances are He was working through the heroes. Compare Omniscient Morality License, where a god justifies seemingly unethical actions by revealing their incredible knowledge let them know it would lead to good in the future.

Opposite of God Is Evil, Jerkass Gods, and God and Satan Are Both Jerks. For a Perspective Flip, see Satan Is Good. If it's an open question whether God is good, the characters may elect to play Religious Russian Roulette.