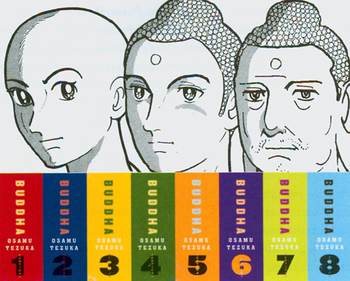 Buddha is a manga by Osamu Tezuka, which was serialized from 1972 to 1983. It is an eight-volume, highly embellished account of Siddhartha Gautama/Buddha's life, incorporating many fantasy elements and re-interpreting several legends about Buddha's life.

Some of the other major characters include Devadatta, who was Raised by Wolves, Tatta, who was born with the power to transfer his mind into animals, Migaila, a former bandit turned good, Yatala, a Gentle Giant (only once you get to know him), and Ananda, Devadatta's half brother, another bandit-turned good.