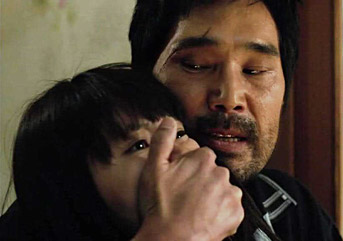 Past Pete: Would somebody tell me what's been goin' on here? Who was that creep, anyways?
Sora: Hello? That creep was... [Goofy clamps his hand over Sora's mouth]
Goofy: Sora, that's a secret!
— Kingdom Hearts II
Advertisement:

Similar to the Finger Muzzle, this is a more direct and easier way of shutting someone up. If Alice is being kidnapped, the best way to prevent her from crying out is by grabbing her and covering her mouth. Not only that, but Bob could easily do it if he just wanted her to stop talking for some reason.

This gesture can be threatening or playful, depending on the context. Rescuers may sometimes use this if they have to sneak up on a friend from behind and don't want them alerting nearby foes by yelling in surprise. If in hiding, the more self-controlled character may use it to keep the frightened character from crying out inadvertently.

It bears noting that this method of trying to subdue someone can be defeated if the person doing it is capable of feeling pain, namely by biting down hard on said person's hand.

This is Truth in Television to some extent — in situations where a child is kidnapped, the kidnapper will often grab them and place a hand over their mouth, since sedating them is unnecessary due to their small size making it harder for them to fight back.