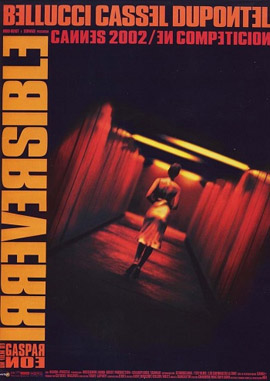 Events over the course of one traumatic night in Paris unfold in reverse chronological order as a beautiful woman named Alex (Monica Bellucci) is brutally raped and beaten by a stranger in an underpass. Her boyfriend Marcus (Vincent Cassel) and ex-boyfriend Pierre (Albert Dupontel) take matters into their own hands by hiring two criminals to help them find the rapist so that they can exact revenge.

The film's unorthodox presentation enables it to show an examination of the destructive nature of cause and effect, steeped in Dramatic Irony as it reveals just how irreversible the events that unfold truly are.

To this day, the film is mostly known for the controversy it stirred upon release, mainly directed at several scenes depicting intensely graphic violence that many saw as sadistic and gratuitous, alongside accusations of homophobia. Out of the 2,400 audience members in attendance at its 2002 Cannes Film Festival premiere, 20 fainted and required medical attention, and over 200 walked out (which its French DVD release proudly declares on the back).

In 2019, Noé re-edited the film in chronological order and premiered it with the subtitle "Inversion intégrale" (Straight Cut) at the 2019 Venice International Film Festival. Originally conceived as a special feature for an upcoming Blu-ray release of the film (similar to how Memento has its own chronological edition as a DVD easter egg), Noé found that once he created the cut, it was strong enough to warrant its own release. This version was released theatrically in France on August 26, 2020.