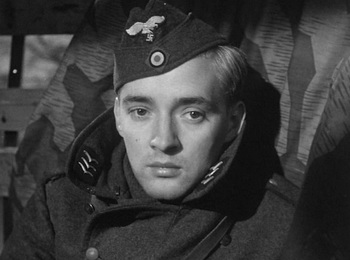 Decision Before Dawn is a 1951 film directed by Anatole Litvak.

The setting is early December 1944, on the Western Front of World War II. Lt. Rennick (Richard Baseheart) is a communications officer dispatched to military intelligence after recuperating from a wound suffered on D-Day. He is sent to a unit that specializes in recruiting German POWs and sending them back into German lines as spies to gather intelligence. Among the volunteer spies the unit gathers are a Sgt. Barth (Hans Christian Blech), code-named "Tiger", and a fresh-faced young medic, Cpl. Mauer, code named "Happy" (Oskar Werner, best remembered today for starring in Jules and Jim). Barth and Mauer are polar opposites: Barth is a cynic who volunteered in order to earn some American cash, while Mauer is a young idealist who recognizes that Nazi Germany is evil and wants the war to end as soon as possible.

Barth and Mauer are given separate but related missions. A Nazi general has offered to surrender an entire corps if he can make contact with the Americans. The corps is stationed near Mannheim, which is Barth's home town; he will assist Mauer in infiltrating Germany and making contact with the German officers. Meanwhile, Mauer is sent off separately to discover the whereabouts of the 11th Panzer Corps, a strong unit located somewhere nearby that could interfere with the surrender of the other corps. The three soldiers parachute into Germany together, and the narrative then leaves Rennick and Barth behind for a while to follow Mauer as he goes on a difficult, hazardous mission behind German lines.

Klaus Kinski makes his film debut with a small part as an overeager young volunteer.