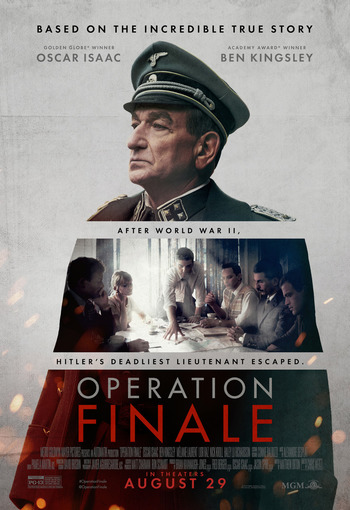 Operation Finale is a 2018 film directed by Chris Weitz.

It is a Based on a True Story tale of the Israeli mission to kidnap Adolf Eichmann in 1960. Israeli intelligence receives word that Eichmann (Ben Kingsley), head of "Jewish affairs" for the SS and a principal architect of The Holocaust, is hiding in Argentina under the name "Ricardo Klement", working in a factory, with his wife and children. He's even hobnobbing with Argentinian fascists that support deposed dictator Juan Peron.

Argentina has proven unwilling to hand over the Nazis hiding there, so the Israelis elect to stage a daring mission to kidnap Eichmann and bring him back to Israel for trial. Peter Malkin (Oscar Isaac), who has experience in hunting down and killing fugitive Nazis, is part of the Mossad team sent to Argentina. The mission is difficult: they must find "Klement", confirm that he is Eichmann, kidnap him, then somehow get him past security at the Buenos Aires airport and on to an El Al plane. They succeed in snatching Eichmann, but a passer-by sees Malkin's face...

Mélanie Laurent plays Hanna Elian, Peter's old girlfriend and a medical doctor who is charged with keeping Eichmann sedated on the way to the airport. Nick Kroll plays Rafi Eitan, leader of the Mossad team. Alexandre Desplat composed the score.

Tropes featured in the movie: