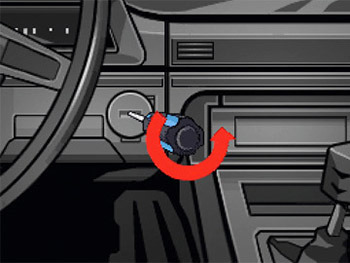 Who needs keys when you can just use a screwdriver?
"To hotwire a vehicle faster, repeatedly press LT or RT."
— On-screen tip, Grand Theft Auto IV
Advertisement:

In the current situation, now is time for action from a character, and that character needs wheels. A vehicle is nowhere in sight, so what does the character do? He hotwires the car in under five seconds and gets on his way.

Wait a second. That looked a lot easier than it actually is, and that character shouldn't even know the first thing about hotwiring the car!

That's where this trope comes from. When needed, everybody can hotwire a vehicle at any time. All they need to do is yank the protective covering off of the wires, rip out two of the wires and connect them together. This not only starts the car but it also defeats the steering column's locking mechanisms.

This may well be on the way to being a Discredited Trope, as more and more cars either require the key fob to be present before they'll start, or incorporate a necessary processor into the key itself.