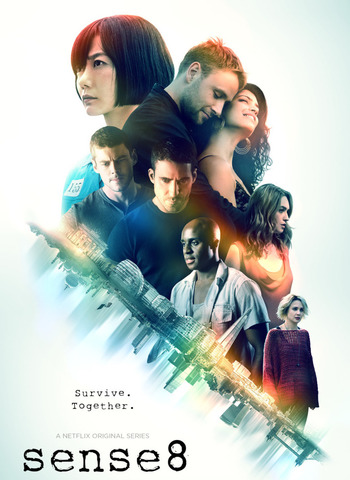 I Am We.
Will: I'm losing my mind!
Jonas: No, it's just expanding.
Advertisement:

Sense8 (pronounced as 'sense-eight' or 'sensate') is a 2015 Netflix original series jointly created by The Wachowskis with J. Michael Straczynski.

Following a traumatic event, eight strangers in eight different parts of the world find themselves telepathically and empathetically linked. While they struggle both with this new connection and with their own personal lives, forces beyond their control seek to manipulate or destroy them. Now the eight must work together, lending each other their different skill sets and experiences, as they try to get the bottom of who and why.

Sense8 was released on Netflix on June 5, 2015. Watch the first trailer here

, and the Seven Other Selves trailer here

Its second season was officially announced on August 8, 2015, itself the in-universe shared date of birth of the sensate protagonists. The first trailer

On June 1st 2017, Netflix cancelled the show. However, intense fan pressure led to Netflix green-lighting a two-and-a-half hour special to conclude the story and most of the major plot points.

See also: In Your Eyes and Six Chances

Kala Has An Idea

Kala Has An Idea