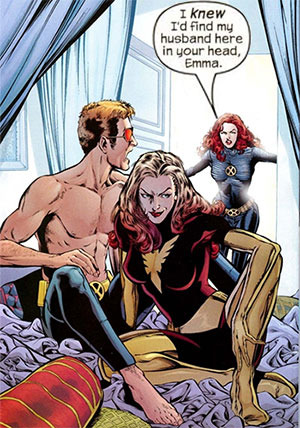 Cheating on a telepath with another telepath? Bad move, Scott...
Advertisement:

When two (or more) people have psychic sex, from beaming sensual pleasures to each other, to copulating in a dreamscape of their minds' creation.

This rarely leads to physical consequences as it would in the real world, since it happens in the Astral Plane, unless Your Mind Makes It Real. Emotional matters are a different story, since it is otherwise no different from a physical affair.

On the less sci-fi side: yes, most people are guilty of the one-sided version of this at some time in their life. Also, some religions consider it to be a sin.

Of course, not to be confused with Mind Screw or Mind Rape, though there's a strong possibility of overlap with the latter.

A sister trope of the less sexual Dream Walker and Talking in Your Dreams.