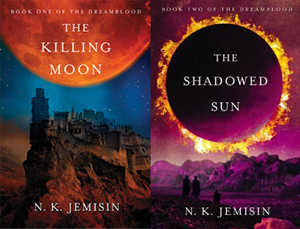 In the desert city-state of Gujaareh, peace is the only law. Along its ancient stone streets, there is no crime or violence. Priests of the dream-goddess, known as Gatherers, maintain order: harvesting the dreams of the citizens, healing the injured, and guiding the dreamers into the afterlife...
Advertisement:

The Dreamblood Duology (2012) is a series of two Fantasy novels by American author N. K. Jemisin and inspired by Ancient Egypt. It is set mainly in the city-state of Gujaareh, ruled by the law of the dream-goddess Hananja whose priests oversee both the living and dreaming lives of her subjects. Narcomancy, the magic inherent in dreams, and the corruption of power are central themes in the story.

The first novel, The Killing Moon, tells about Gatherer Ehiru and his apprentice Nijiri, and how they discover corruption at the very heart of Gujaareh's power.

The second novel, The Shadowed Sun, tells about Hanani, the first female Sharer, and her discovery of what lies outside the cloistered halls of the Hetawa.

, available online, is a short story set in the same world, centuries before the time of the books.

The Dreamblood Duology provides examples of: