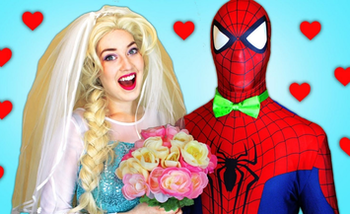 This is one of the least bizarre ones.
Advertisement:

YouTube Kids' Channels are supposedly aimed at children 8 years or younger, and usually try to pass as Edutainment. Though YouTube has hosted videos targeted to kids since its beginning, this new (and infamous) breed emerged in 2013-2017.

While they are notorious for their lack of budget and unprofessional nature, some are widely infamous among parents and adults in general for their content that is rather inappropriate for their Target Audience, such as not-so-subtle Vulgar Humor, Family-Unfriendly Violence, Nightmare Fuel (with bits of a Widget Series taken to even weirder levels) and just plain weirdness. A large majority of them feature at least a few popular copyrighted and trademarked cartoon characters from whatever is most popular with kids at the time, often without researching them. Mickey Mouse, Elsa from Frozennote or "Frozen Elsa", as the titles of these videos frequently call her (the reason the channels are known as "Elsagate" to the mass media) and Spider-Man are the most popular characters used in these videos, much to the disgust of other YouTubers who see these videos.

The videos are notable for raking in millions of views very easily, sometimes within a matter of days, but just why they do stumps adults. One argument is that they're bots but another argument is that they are popular with kids who are just too young to click on something else. YouTube has a popular "YouTube Kids" app that is full of these videos (though attempts have been made to fix this). As a result, the videos likely auto-play and thus rack up views. Comments on these videos will usually be gibberish or simple feedback from alleged viewers.

The origin of this trend is hard to tell. A potential origin is normal toy channels that role-played with dolls. Someone eventually decided to start cosplaying characters in videos, it caught on, and the whole trend began. It seems like YouTube has wised up to the fad, as many of these channels have since been deleted— presumably for their inappropriate content and/or unauthorized use of copyrighted and trademarked characters. If you find a surviving channel or archived channels, be forewarned as Sturgeon's Law is in full effect with these videos.

Note: Regardless of the trope name, not all kids' channels count. Most are quite innocent, and some manage to be surprisingly good. YouTube Kids' Channels refers to the infamous variant.

Contrast YouTube Poop and videos made with GoAnimate, which also subvert kids' favorite shows, but almost entirely for not-kid-oriented purposes.

In this rather tame(-looking) YouTube Kids Channel animation, Boom Sonic's fan isn't working, in which Amy fixes by smacking. Then the fan breaks again, in which Sonic tries more severe Percussive Maintenance, with realistic results. Then Sonic and Amy try to do the same to an ANTHROPOMORPHIC air conditioner when it breaks.<br><br>(Text on video are part of the original)

In this rather tame(-looking) YouTube Kids Channel animation, Boom Sonic's fan isn't working, in which Amy fixes by smacking. Then the fan breaks again, in which Sonic tries more severe Percussive Maintenance, with realistic results. Then Sonic and Amy try to do the same to an ANTHROPOMORPHIC air conditioner when it breaks.<br><br>(Text on video are part of the original)