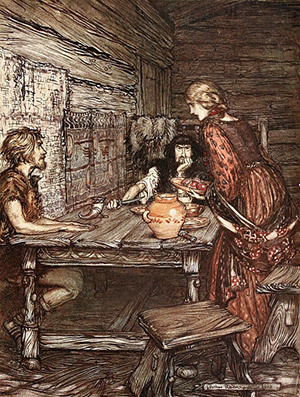 "Menelaus, there are some strangers come here, two men, who look like sons of Zeus. What are we to do? Shall we take their horses out, or tell them to find friends elsewhere as they best can?"

Menelaus was very angry and said, "Eteoneus, son of Boethous, you never used to be a fool, but now you talk like a simpleton. Take their horses out, of course, and show the strangers in that they may have supper; you and I have stayed often enough at other people's houses before we got back here, where heaven grant that we may rest in peace henceforward."
— The Odyssey
Advertisement:

Hospitality is sacred. The host must not harm the guest, the guest must not harm the host, and not offering in the first place is a serious affront. In Ancient Greek, hospitality was called xenia and was sacred; Zeus was called Zeus Xenios in his function as god and guarantor of hospitality and protectors of guests. This comes from the word for "stranger"; so, for that matter, does "hospitality". Another word from that root is "hostile", which helps explain why the rules are so severe.

Less popular in modern times with the rise in hotels and forms of transport that mean twenty miles is not a day's journey, and decreasing odds that you will have to fight someone who's a stranger, but Older Than Feudalism and of vast historical importance. Because it's less important nowadays, the extreme punishments dealt out to people who abuse or refuse hospitality in classic tales appear disproportionate.

May be the Good Old Ways, practiced in Arcadia and by the Noble Savage.

Tastes Like Friendship is closely related. The host/guest bond may in fact be triggered by their eating salt (or bread and salt

) together.note These signs are characteristic of Eastern Mediterranean cultures and those heavily influenced by them, e.g. Slavic cultures (which adapted it from Eastern Roman/Byzantine/Greek culture).

Often explicitly invoked in No, Mr. Bond, I Expect You to Dine. Must Be Invited is closely related, though a being bound by both rules is going to find it very difficult to hurt anyone (at least while they're at home!). The traditional solution to this problem is greeting your guests with: "All those with goodwill toward this house may enter it." As a result of this many Villain Over for Dinner situations usually at least try to stay civil and both parties will save any hostilities for once they're outside.

Often associated with the Old American South, the British Nobility, the Latter-Day Saints and Japan. Frequently results in Angel Unaware. Often a result of Bedouin Rescue Service. If played up in an inappropriate setting or to a ridiculous extent, it's Stranger Safety. When a guest abuses this by extending their stay overly long, it becomes The Thing That Would Not Leave (and expect a Cowboy Cop to violate this through No Warrant? No Problem!). Contrast with Food Chains where it isn't safe to eat anything. For the ultimate violation, see Nasty Party.