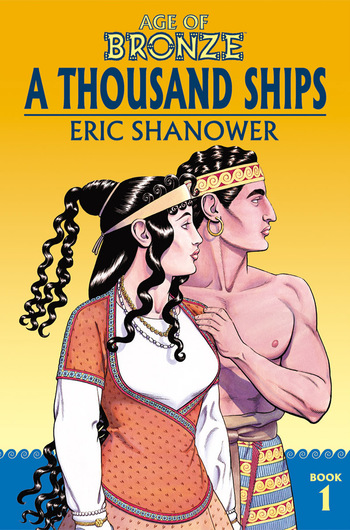 In 1998, Eric Shanower started a seven-volume series that would retell the story of The Trojan War with all of the mythical elements removed. Still ongoing, it is published in magazine form by Image Comics and in graphic novel form by Hungry Tiger Press.

Dreams and visions by the god-touched and regular people alike occur throughout, and one of these dreams kicks the plot off: Paris dreams the beauty contest of the goddesses and the awarding of the golden apple. Events then lead him to Troy, where he is reunited with his family and learns of the most beautiful woman in the world, Helen of Sparta.

Sent to recover the king's long-lost sister, Paris' first stop is Lakedaemon, where Menelaus rules by right of his marriage to Helen. Instead of proceeding to Salamis and Hesione, Paris seduces Helen and convinces her to accompany him to Troy. His men raid the palace as they leave, taking most of the valuables with them.

A storm blows Paris' ship off course, preventing him from being in Troy when the first Achaean embassy reaches Troy. King Priam's reply is... less than diplomatic, and the Achaean Greeks prepare for war.

Kings, princes, and their people gather and prepare for war. Helen's beauty and the kingship she brought were such prizes that each suitor swore an oath before the gods to defend and aid the suitor chosen, should Helen be stolen. The suitors' oath is invoked, and breaking a sacred oath would offend the gods and bring disaster on the forsworn.

Those too young or old for the suitors' oath are recruited as well. Achilles is found where his mother hid him, and the old but wise Nestor is convinced to join.

After many trials and the sacrifice of a maiden, the army arrives on an island within sight of Troy's walls. A final embassy is sent, but Paris' actions rather spectacularly screw things up for both sides.

The first four novels in the series are:

All further issues have been digital.

The Age of Bronze site can be found here