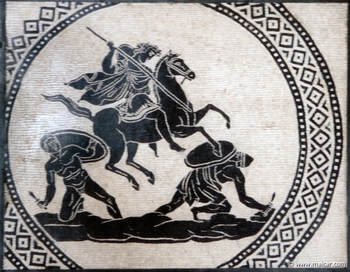 Ever heard of an ancient conflict called The Trojan War? Quite a story, really. And then there's Homer's epics The Iliad and The Odyssey, telling the tale in forty-eight books and tens of thousands of lines of dactylic hexameter...all of which focus on less than one year of the decade-long conflict, and the years Odysseus spent lost at sea afterwards.

Something's missing — namely, the first nine years of the war, the actual end of the war, and associated myths. Surely they weren't just floating about in the Oral Tradition until some ancient tragedians got hold of them?

As it happens, they weren't. It turns out that The Iliad and the The Odyssey were not the only epics that pulled together the tales of the Trojan War. In fact, there were eight:

We've lost every one of the above except for Homer's epics. Sorry.

But yet we still know of them. References to and quotations from the lost epics have survived in fragments. By an incredible stroke of luck, we have a work titled the Chrestomathy by an unknown Proclus, which actually summarizes the events that take place in each epic.

Thanks to these sources, we know that the epics covered everything from the marriage of Peleus and Thetis to Odysseus's death.

The Trojan Cycle provides examples of: