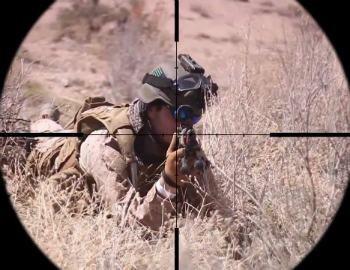 Peek-a-boo.
"Nothing personal, mate. I'm just better."
— The Sniper, Team Fortress 2, after winning a duel like this
Advertisement:

Duels in fiction are thrilling because of the natural tension that is created when two badasses face down each other at short range, with deadly weapons, intent to kill, and nervous bystanders watching with fear and anticipation. Anything can happen... and then it does, exploding into action, and then they end with a very final conclusion.

A Sniper Duel takes the tension in this trope and plays it Up to Eleven. Instead of facing off at close range with small handguns, the duelists may be hundreds of yards or even over a mile apart wielding high-power rifles. Both may be masters of camouflage and/or deception. Sniper duels in fiction can last days or weeks, as each tries to draw the other into a vulnerable position but conceal their own, and often end with a single shot. If The Squad is caught out in the open by an enemy sniper, often their only chance of salvation is a sniper from their team, who will be the only member with the ability to save the day. Note that this is partially Truth in Television, because, as it turns out, the best way to counter a hostile sniper is often times a friendly one, though both sides would probably field more than just a single sniper if they could, so in reality it's more likely to be a sniper team deathmatch instead.

Sniper duels are common in war movies where they add a personal touch to the often impersonal combat between people who've never met before and are just fighting for their countries: snipers get a close up view of their targets before killing them, and this fact often makes it personal for the teammates of the person who just got shot by an unseen assailant.

Sometimes the duel is used to highlight the differences between two factions (possibly a hero and a villain), where one is a Cold Sniper and the other is a Friendly Sniper. The characters often possess Improbable Aiming Skills and the fight may end with a headshot and for truly badass characters, a Scope Snipe. Combat Pragmatists who lack either the skill, equipment or patience to engage in a Sniper Duel may instead avert it by calling in an airstrike or artillery strike. A Sniper Scope Glint from either combatant's rifles can give them away and often results in one of the snipers getting killed.