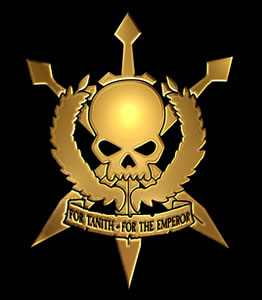 As the Emperor protects, so must we.
"Men of Tanith, do you want to live forever?"
Advertisement:

Gaunt's Ghosts is a series of novels by Dan Abnett, set in the Warhammer 40,000 universe. Sometimes described as "Sharpe meets Warhammer 40k", the series follows a band of soldiers in the ultimate Crapsack Universe, exploring war settings ranging from airborne assault to trench fighting.note The Sharpe inspiration was lampshaded in the third book, Necropolis, which refers to the troops singing the marching song "Over the Skies and Far Away", a case of Sharpe's signature "Over the Hills and Far Away" IN SPACE!

The books follow Colonel-Commissar Ibram Gaunt and the Tanith First-and-Only, a single regiment within the trillions-strong Imperial Guard. Nicknamed the "Ghosts", the series focuses on the Tanith's experiences as a tiny part of a vast decades-long crusade to liberate the Sabbat Worlds from Chaos. Written in a style reminiscent of Bernard Cornwell's massively successful Sharpe series, the series has been well received, its strong points including believable battles, capturing the "feel" of the gothic far-future Warhammer 40,000, and a realistic portrayal of the Imperial Guard as actual humans. Gaunt's Ghosts is the longest-running and the most successful book series set in the 40k universe.

Thirteen novels and a number of short stories have been published so far:

Additionally, the Sabbat Worlds Crusade setting has essentially spawned a mini-continuity within the Warhammer 40,000 universe, with a number of additional works that are not limited to just Gaunt's Ghosts.

There is "The Sabbat Worlds Crusade" written as an Imperial history of the early part of the central campaign of the novels. An updated edition has been been announced and is slated for release in November of 2019.

The series also has a spinoff, Double Eagle, focusing on the fighter squadron introduced in The Guns of Tanith which has its own planned, but unwritten, sequel, Interceptor City. Titanicus is not a direct spin off but it's set during the Sabbat Worlds Crusade. There is also the anthology Sabbat Worlds, a collection of short stories written by other Black Library authors including Abnett which are set during the Crusade. Another collection Sabbat Crusade is to be released shortly.

In 2021, Abnett started releasing a spinoff series entitled Ghost Dossier, which consists of novel-length tales of standalone Ghost adventures that happened some time between the other stories, which allows for the return of long killed-off characters.

As part of Warhammer 40,000, the series involves a large number of the tropes on that page, as well as employing literary and narrative tropes of its own: