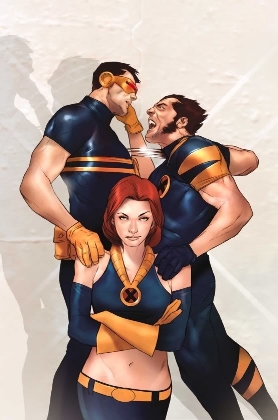 Sometimes, Love Triangles are just no fun.
Now Ernie rushed out into the street, his gold top in his hand,
He said, "If you wanna marry Susie, you'll fight for her like a man!"
"Oh, why don't we play cards for her?" he sneeringly replied,
"And just to make it interesting we'll have a shilling on the side."
— Benny Hill, "Ernie, the Fastest Milkman in the West"

Two guys have one goal in common: getting the girl. In essence, a Cock Fight is what happens when the vying between the two suitors escalates into open hostility. Often occurs if neither was aware of the existence of the other, or when one has been courting the girl for a while. Typically, the fighters tend to focus on each other with the woman becoming secondary goal or, in a nastier tone, treated as a trophy.

This is a staple of romantic films but it can show up in any type of work. Usually, this happens before the girl's heart is clearly settled between her two suitors but, even when her choice is made and spoken out, there is still a chance for the Cock Fight to turn up since Romantic False Leads are not known for giving up easily. If the losing side refuses to acknowledge defeat, the next step can be If I Can't Have You….

When it comes to the competition itself, it is generally about displaying protectiveness, doing nice things for the girl, strength contests and other kinds of symbolic measurements comparisons, preferably in front of her. More often than not, things can get out of hand — many times up to physical confrontation — if one of the suitors gets too close to the girl in front of his rival, or worse still, if he openly claims the girl for himself.

During such conflicts, the girl can either stay neutral or try to intervene whether or not her choice is made. If she takes the second option, what she does can go from trying to soothe the guys' differences, telling them to shut up and stop fighting over her, or even get the HELL out until they stop being stupid. Alternately, she can encourage the fighting and stir things up worse, or if her choices are constrained by the outcome of the fight for some reason, she can help the guy who she wants to win.

This is a subtrope of the Love Triangle and related to Triang Relations. Highly probable in a Two Guys and a Girl setting. Often happens after a Green-Eyed Epiphany.

Contrast Courtly Love, If I Can't Have You…, and Stalker with a Crush. See also Better Partner Assertion, the nonviolent version of this, Opposites Attract Revenge for what this might lead to, and Lover Tug of War, a rough Distaff Counterpart that is usually more light-hearted.

Sister Trope to Homosocial Heterosexuality, with the difference that the Cock Fight is always hostile and competitive, very often physical, and both men usually don't like nor respect each other at all, at least initially. Also, the woman is often present during these confrontations and can state her choice anytime. See also Rich Suitor, Poor Suitor and Noble Male, Roguish Male for two scenarios that very often go hand-in-hand with this trope.

Not related to Cat Fight, but if two girls have mutual interest over the same dude, they can get into one. It rarely overlaps with a Dogfight. (Ace Pilots are too classy for that.)

This trope is named for the rooster as a symbolically vain and proud male animal which fights over a mate, though the double-meaning is not unintentional.

For literal animal fights, see Beastly Bloodsports and Mon. If the fight involves actual cocks (i.e. roosters), they are examples of Cocky Rooster.