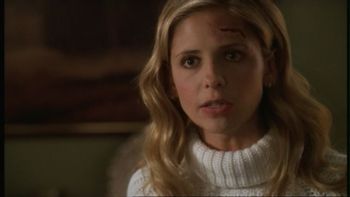 "I guess I'm starting to understand why there's no ancient prophecy about a Chosen One and her friends."
"They were once a real powerful group. It's not a stretch to say they ruled the world. And when they broke up everyone blamed Yoko, but the fact is the group split itself apart, she just happened to be there."
— Spike
Advertisement:

Colonel McNamara talks with Mr. Ward about plans for The Initiative, getting Riley back and dealing with Buffy. Spike tells Adam that Buffy is going to be a difficult challenge to defeat and he shouldn't underestimate her. Spike talks about killing two Slayers and not being able to kill Buffy, especially because of the chip now in his head. The two plan to separate Buffy from her friends.

Still upset about Angel, Buffy returns from L.A. to her empty dorm room. Xander brings Riley some rather colorful clothes to wear, and they talk about their mutual distaste for Angel. Not realizing that he didn't know, Xander accidentally tells Riley about how pure happiness with Buffy is the trigger that removed Angel's curse.

Giles is singing Lynyrd Skynyrd's "Freebird", when Spike surprises him by showing up in his apartment. Spike talks with Giles about files inside The Initiative that he might be able to get for a very large price. Spike tells Giles that Buffy doesn't respect her former Watcher anymore, and that upsets Giles.

Willow and Tara play with their new kitten while planning their class schedule for next year. They also talk about future housing plans, but Willow hasn't talked with Buffy yet and isn't sure what she wants to do now that things have changed so much.

Riley goes to Buffy in the funny clown pants Xander gave him to wear. Using a radio, he's tapped into The Initiative and is making sure he's aware of everything going on with the operation. She mentions that Angel upset her, but she doesn't want to talk about it and Riley leaves. Xander and Anya bring Spike fatigues to wear and among them is a gun, which Spike is amused to find and is apparently ready to shoot Xander only for the chip to go off as soon as he aims it. Xander is amused that Spike can't even aim weapons anymore, especially considering the gun is fake. Recovering, Spike continues to tear apart the Scooby Gang by making Xander feel unwanted by convincing him that the rest of the gang doesn't feel he's useful.

Buffy goes patrolling and runs into Forrest, who is also looking for Adam. They argue as they go into a cave and find Adam. The three of them fight, Adam skewers Forrest and Buffy makes a run for it. Limping, she falls and slides down a hill, hitting her head on a rock. Pretending to have sneaked into The Initiative and retrieved some disks with information, Spike charges into Giles' place. Giles continues to get drunk while Willow tries to decrypt the disks. Spike notices Willow and Tara's behaviour towards each other and, realizing they're in a relationship, decides to use it and talks to Willow about her new 'Wicca' interests and how Buffy and Xander don't seem to support it. Willow thinks that means that their friends aren't accepting their romantic relationship.

Riley hears that there is trouble on the streets through his radio and goes to check it out. He finds that it is Angel fighting off the commandos, and Riley refuses to let Angel go see Buffy. The two have a brutal fight, of which Angel is clearly the victor. Since the fight is personal for both combatants, no punches are pulled. Angel, who normally refrains from using his superior physical strength against a human, is still stinging from Buffy's recent comments in LA and holds nothing back in the fight. Similarly, Riley, having just learned what makes Angel lose his soul, uses every weapon (literally) on him - his tazer, a bottle, and his baton.

The fight violently ends when Riley, having momentarily stunned Angel with his taser, is lifted by Angel and thrown into several trash cans. Angel then picks him up again and throws him once again into the side of a building. Finally, both run off when a military truck comes down the street. Buffy returns to her dorm room and Angel shows up. As Angel tries to talk to Buffy, Riley barges in and points a gun at Angel. Angel taunts Riley and the two come to blows again. Buffy separates them and wants to talk to Angel alone. Riley refuses to leave the room, so Buffy and Angel depart to the hallway, though not before Angel taunts Riley with a superior smirk.

Buffy goes off on Angel and then they laugh when Angel confesses he came to make up. Angel admits that he had no right to talk to Buffy like he had before, and explains that he had been attacked by the Initiative soldiers and Riley only waded into the middle of it and immediately accused him. Accepting, Buffy also admits that Angel was not entirely wrong; the two are no longer a part of the other's worlds, and she had no right to barge in on his. Having concluded his business, Angel leaves, stating that he doesn't like Riley, and Buffy thanks him, amused and grateful towards his jealousy.

Spike reports back to Adam, happy to have split up the Scooby Gang. Riley is worried that Buffy has reunited with Angel, and confesses that he already knows about how Angel can lose his soul, which set him off. They profess their love to each other and then Buffy brings him bad news. She tells him that Forrest is dead and he leaves quickly.

Everyone meets at Giles's house, and Buffy intends to go back to the cave believing that Adam wouldn't have been there for no reason. As Giles gets more drunk and more bitter about the fact that Buffy doesn't need him anymore, Buffy declares she's going to the cave alone. Both Willow and Xander (with Spike's words ringing in their minds) take exception at this; Xander believing that Buffy only needs him around for menial tasks and accuses her of this. Buffy defends herself, and gets angry at Xander for telling Riley the full details about her relationship with Angel. Tara and Anya, feeling very uncomfortable as the quarrel quickly descends into a huge argument, sneak into the bathroom and hide. Soon personal feelings start to come up, as Willow makes her dislike of Xander and Anya's relationship vocal (particularly, the fact she and Xander are hardly apart) and accuses Buffy of not taking her seriously and being uneasy with her since discovering Tara was her girlfriend. Xander begins to argue that Buffy and Willow forgot about him when they went off to college... Then realizes what Willow has just said and is shocked (with a "bloody hell" coming from Giles who has gone upstairs).

By now, Buffy has had enough of her supposed friends attacking her, and angrily asks how they could possibly help her? Xander and Willow are stunned into silence by these hurtful words, and Buffy declares she's on her own and can see why the prophecies never mention a Chosen One having friends. As she leaves, she tells everyone she's going to someone she can count on.

In Adam's lair, Riley shows up as an expected guest.