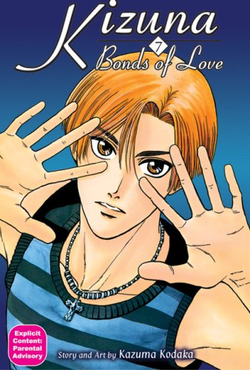 Kizuna: Bonds of Love is a yaoi manga, authored by Kazuma Kodaka. Released in 1992 and ending with the release of the final volume in 2008, it allegedly was one of the first and most popular manga to feature a homosexual relationship. It also spawned 3 OVAs.

The story centers on the relationship between Kei Enjouji, a Tall, Dark, and Snarky highschool student, and Ranmaru Samejima, a Heir to the Dojo. Enjouji fell for Ranmaru almost at first sight when they were kids and he saw Ranmaru practicing his kendo moves, and started pursuing a relationship with him. Ranmaru is at first reluctant, but Enjouji perseveres and they become boyfriends anyway.

However, their relationship won't be an easy one... since after Enjouji's mother Hotaru dies, she leaves him a letter revealing his heritage. Which happens to be linked to a powerful Yakuza clan, whose leader Takeshi Sagano is Enjouji's long lost father. Enjouji and Ranmaru attempt to keep up with their lives and go to college peacefully, but the Yakuza won't leave them alone, and specially not when Enjouji's half-brother Kai takes an interest in Ranmaru himself...

A spin-off series of the same named Gun and Heaven chapters was created, however this time covering Roy and Jack's lives outside the main series after their reunion.