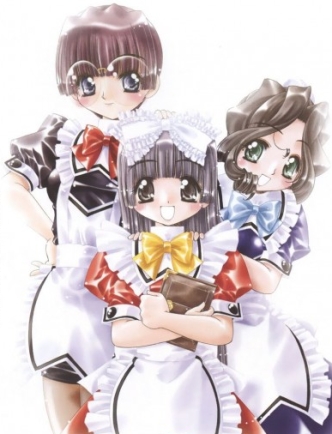 Aruto, Kokoro and Iina
"This is Kokoro Library, a place where miracles happen."
Advertisement:

Kokoro Library depicts the lives of three sisters who manage the library inherited from their parents, far out in the hills. There is Iina, the oldest and the motherly one; Aruto, the bookworm intellectual one; and Kokoro, the youngest who has just started to learn the ropes of becoming a librarian — and who takes immense pride in the fact that she shares her name with the library.

The series follows the sisters' moments of joy and sadness, usually interspersed with days of boredom when again no customers come to visit the library. It starts out as a typical moe show, but after a few episodes switches gears toward a much more emotional experience, when the girls' interaction with the outside world leads to a string of highs and lows in the relationship between them and with other people. There are a lot of miracles along the way, both small and large.

Kokoro Library started out as a manga by Nobuyuki Takagi, which was serialized in Dengeki Daioh from 2000 to 2002 and compiled into three volumes. It was adapted into an anime in 2001, directed by Koji Masunari, who is perhaps better known for his work on the Read or Die OVA and Kamichu!. Of special note is the soundtrack, composed by Hisaaki Hogari, with its lovely piano-filled themes which feature prominently throughout the latter half of the series.