Manga / The Tyrant Falls in Love 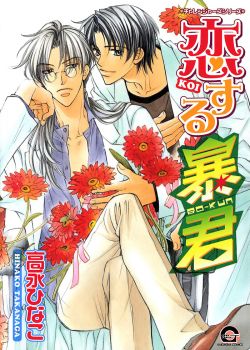 Generic yaoi plot: Aloof seme meets cheerful uke, seme rapes uke, uke falls in love with seme. Now, replace "aloof" with "upbeat and long-suffering," "cheerful" with "violent-tempered and homophobic," and "falls in love with" with "tries his damnedest to deny his feelings for" and you have Hinako Takanaga's Koisuru Boukun or, as it's known in English, The Tyrant Falls in Love.
Advertisement:

A Spin-Off of Challengers, which had side characters Souichi Tatsumi, Tomoe's homophobic and tyrannical older brother, and Tetsuhiro Morinaga, his lab assistant and kohai who harbors a longtime crush on him. Despite Souichi's homophobia, Morinaga managed to confess his love for him without Souichi promptly beating the living daylights out of him or getting as far away from him as possible. Souichi, however, did kiss Morinaga in exchange for them forgetting that anything ever happened to compromise their friendship.

The Tyrant Falls in Love takes place about a year after these events, with nothing much changed. Souichi is still a homophobic tyrant and Morinaga still his loyal and lovelorn companion. It looks like Morinaga's 5-year-old unrequited love will only drag on, until one night when Souichi, on a drinking binge at Morinaga's house, unknowingly downs an aphrodisiac stored in the back of a cabinet. Morinaga finds Souichi turned on and rendered immobile, realizes that this is a once-in-a-lifetime opportunity, and finally does what he's been waiting for five years to do with Souichi.

Since this isn't exactly typical BL fare, the morning after has Souichi attempt to murder Morinaga. When that fails, Morinaga decides to remove himself from Souichi's life before he causes any more trouble...something which Souichi oddly doesn't take well to. But Souichi's a self-professed homophobe, so just because he doesn't like Morinaga leaving his side doesn't mean that a romantic relationship could ever form between the two, no matter how much Morinaga pursues Souichi, no matter how overly defensive Souichi becomes of his heterosexuality as if he's got something to hide, no matter how furiously he blushes even when telling Morinaga not to misinterpret his words...

With characters able to elicit both laughs and sympathy, a thoroughly entertaining puppy-like seme/tsunderish uke dynamic, and hot sex scenes that feel more romantic than trashy, it's a fun ride to the end.

The Tyrant Falls in Love was licensed by DramaQueen, but got stuck in release limbo for over a year before being picked up by DMP for their June imprint; the first volume of the official English translation was released in September of 2010. An animated OVA which covers the first two chapters of Volume 1 also was released in the summer of 2010, and another OVA, covering chapters 3-5, was released in November of the same year..