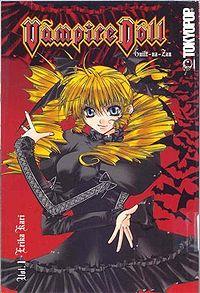 "There was once a vampire aristocrat who ruled the night in Europe. Amongst his dark powers were the abilities to control the beasts of the earth and call thunder from the sky. For years we struggled to destroy him by borrowing God's power. At last, we were able to seal his soul in a cross." So says the record of the exorcist Kyoeisai Yotobari.
Advertisement:

Written and drawn by Erika Kari (who happens to like pretty boys in frilly clothes), this manga is a hell of a lot more light-hearted than it seems from the opening quote. The manga revolves around Guilt-na-Zan, a vampire whose soul was sealed into a (female) wax doll and forced to become a servant to the descendant of the man who sealed him in the cross in the first place. Throw in a Death God, evil spirits, and a bat-man, and watch the hijinks ensue.

The manga ran in the josei magazine Monthly Comic Zero Sum from 2003 to 2008, and was compiled into six volumes. It was licensed in English by Tokyopop.

This manga presents examples of: