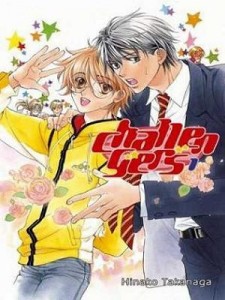 Challengers is the older brother of Yaoi manga The Tyrant Falls in Love by Takanaga Hinako, which ran in Hanamaru Manga from 1995 to 1999. She also wrote Little Butterfly, Awkward Silence and Liberty Liberty!.

Tomoe Tatsumi is a naive freshman who has just arrived in Tokyo. He gets lost looking for his hotel and runs into an older gentleman called Mitsugi Kurokawa and his friend Isogai who have just been out for a drink. Isogai -of course - throws up all over the poor boy and Kurokawa gets Tomoe's jacket dry-cleaned as an apology. He lets him stay the night at his apartment (since the directions were in the pocket of Tomoe's jacket) and escorts him to the university the next day. Kurokawa finds himself attracted to Tomoe's naive, scatter-brained charm and ends up kissing him goodbye one day. Tomoe seems to think it was some sort of foreign greeting and ends up moving in with Kurokawa as a tenant.

Kurokawa can't act on his newfound attraction though due to Tomoe's complete obliviousness and his insanely over-protective and homophobic older brother Souchi who doesn't want his brother in Tokyo at all. Things get much worse when Souichi discovers Kurokawa's true intentions.

Not to be confused with the early 90s Game Show called The Challengers, which focused around current events.