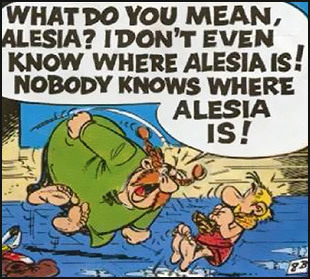 Don't ask a Gaul about the battle of Alesia.

"It's not denial. I'm just very selective about the reality I accept."
— Calvin, Calvin and Hobbes
Advertisement:

When a character refuses to comprehend a particular fact. They'll especially turn it up when someone attempts to tell them directly, which usually results in said would-be confessor aborting the attempt because not only was it a difficult subject to begin with, they can't bring themselves to smash this person's sense of reality.

Regarding unrequited relationships involving someone with Selective Obliviousness; even if everyone else is aware of someone's crush on that person, nobody will ever mention the possibility to the practitioner. Nobody likes to gossip about who is interested in whom. Stop laughing. This is one person's cross to bear alone.

This contrasts with Weirdness Censor, in which everyone except the main characters are oblivious to the bizarre occurrences around them.

Usually, this is supposed to denote a sense of innocence; however, to more cynical viewers, it may appear that the person either consciously or subconsciously knows, and just doesn't want to deal with it

. Or more disturbingly, he refuses to consider it to the point of suppressing it and choosing his own reality, thereby being driven to insanity. It also seems inexplicably popular with characters whose main trait is (apparent) perceptiveness of other people's character. Selective Obliviousness is also a tool that the writers use to keep things in the air, such as for Will They or Won't They? or Belligerent Sexual Tension. Like all stalling tactics, overuse breeds contempt.

Less comically, a character may do this to avoid acknowledging his own guilt or envy in some manner. Often leads to Divided We Fall or Irrational Hatred. Similarly, when applied towards a boss' assumed infallibility, it leads to Blind Obedience.

If this tropes applies to a friend who is willing ignoring his Toxic Friend Influence’s bad behavior based on the belief that the toxic friend has Hidden Depths, it will often end in Post-Support Regret when the toxic friend does something too awful for the friend to Turn the Other Cheek.

Plot-Sensitive Snooping Skills is a sort of involuntary Selective Obliviousness imposed on a character by the limits of the plot. Contrast with Failed a Spot Check, in which the character fails to comprehend something everyone else is aware of.

Oblivious to Love, Giftedly Bad, and No True Scotsman are common forms of this. Theory Tunnelvision is a subtrope. See also I'll Pretend I Didn't Hear That, in which a character feigns Selective Obliviousness in order to avoid the consequences of acknowledging the situation. May be related to I Reject Your Reality and Captain Oblivious. Compare Arbitrary Skepticism.

After realizing Wildernessa has a crush on him, he starts to see her in this way, though it's cut short when Wildernessa doesn't believe Brigid is a kid in a dog suit.

After realizing Wildernessa has a crush on him, he starts to see her in this way, though it's cut short when Wildernessa doesn't believe Brigid is a kid in a dog suit.