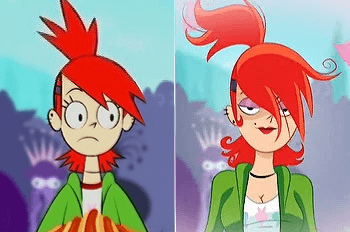 They say love is blind, but sometimes it hallucinates.
"Warning: Image displayed may not reflect reality."
— Interactive Narrator on the image of Umi's Crush Filter when she sees Cthulhu, Cthulhu Saves the World

In visual media, the shortcut to let the audience know that a character has a big crush on someone is to apply the Crush Filter. It's a very specific sort of Imagine Spot, sometimes augmented by the environment.

The viewer/audience sees the object of affection as they are in their normal appearance, even if they're not perfectly cleaned up, tidy, neat, or groomed.

The shot then changes to the crush's point of view, and the person they're crushing on is suddenly highlighted to romanticized perfection. The Hot Wind may come out of nowhere to tousle their hair fetchingly. If they're sweating, it's glistening and sparkling like magical dewdrops so they look pretty and rain-kissed rather than gross and sweaty. If they're not wearing makeup, it's suddenly there and absolutely perfect. The entire world has dropped into Slow Motion for them.

The light may suddenly become all soft and filtered, or full of inexplicable sparkles or bubbles. Red and/or pink hearts may float around the person being filtered. Fireworks may go off, or other aspects of the environment may fall into place as if by magic.

If their gait is normally purposeful or unflinching, it is now, thanks to the magic of a crush, a slinky, sexy sway. The air may fill with the sound of singing angels, or some other appropriate romantic Mood Motif. How detailed and/or sexualized the fantasy vision is will vary by how family-friendly the medium is.

The shot then returns to the object of the crush. If we get another look at the one with the crush, they may be displaying the Crush Blush.

There are innumerable combinations for the effects that show off the gorgeousness of someone affected by the crush filter — limited only by the imagination of the character (and the creative team).

Sometimes, in a story the narrator will launch into Purple Prose whenever the object of the crush is mentioned.

The Crush Filter may also be part of a montage in which the besotted imagines meeting, courting, marrying, raising children with, growing old with, and finally dying happily beside the person they thus envision.

The Crush Filter can be applied for a long-term crush, a child's Precocious Crush on someone older, or for Love at First Sight.

The person being viewed through the crush filter is not Always Female, but frequently is.