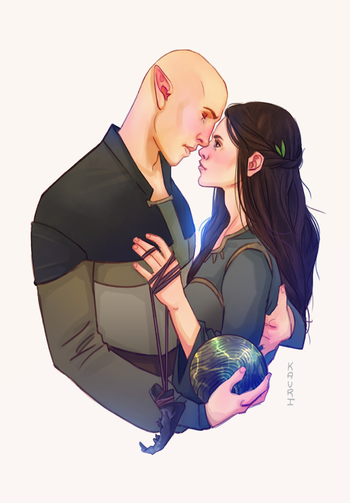 by Kauri
"Do you have anything that you wish to keep?"
"You."
Advertisement:

An AU fanfic of Dragon Age: Inquisition by Milee_Cosgrove

Solas wakes up earlier than he did in canon, but instead of having ample time to prepare for his plan, his unfamiliarity with the current world causes him to be caught by the Templars. He is imprisoned in the Circle of Otswick where he meets Evelyn Trevelyan. Solas, being who and what he is, is dead set on escaping but freedom won't come so easily, not for himself or Evelyn, or any other mages. Meanwhile, the Kirkwall Rebellion and the mage uprising is brewing...

The first part of the story starts with Solas's arrival at Otstwick Circle until two years before the event at the Conclave. The current second part takes place during the canon game, officially starts at chapter 23.

on Archive of Our Own. For other extra and deleted scenes, go here

Has nothing to do with comedic fantasy web series Walking in Circles.