Did You Just Romance Cthulhu? 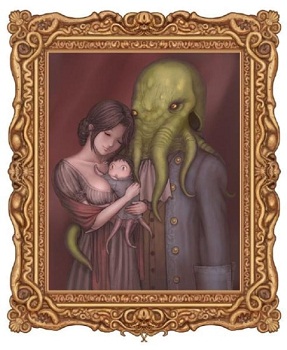 on Pixiv
"I'm an intelligent woman. I know the difference between reality and my own dark fantasies. But I thrill at the idea of being taken by a great tentacled beast. My heart races as I imagine my frail and delicate body being controlled, being used by a force too powerful for me to deny. To feel helpless, vulnerable, it scares me yet it excites me. My body aches with desire as I imagine myself being forced to surrender in the most intimate of ways. Can this be so wrong?"
— Kiki, Ghastly's Ghastly Comic
Advertisement:

Putting the "love" in "Lovecraft".

This is what happens when you make love (in either sense of that phrase) with an Eldritch Abomination, or a Starfish Alien doing a passable imitation of one. Tentacles are a frequent feature. Can be played for sheer Squick, horror, fanservice, laughs or all of the above at the same time. In Lovecraft Lite works, they may well be an Adorable Abomination with genuine romantic chemistry with their mortal partner — needless to say, this is vastly less likely in an actual Cosmic Horror Story.

Might lead to Fetus/Enfant Terrible. A common origin for the Anti-Anti-Christ, able to switch sides as a representation of the human side, but just as likely to become a monster.

Subtrope of Unequal Pairing and Interspecies Romance. Compare and contrast Did We Just Have Tea with Cthulhu?, Mars Needs Women, Boldly Coming, and Divine Date.