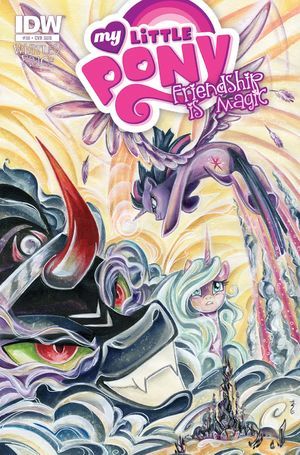 The King has returned! Long live the King!
Advertisement:

Siege of the Crystal Empire

A cloaked pony travels about Equestria, convincing the Flim Flam brothers, Iron Will, and Lightning Dust to join her for some nefarious activity at the upcoming Crystal Faire in hopes to get back to the Mane 6 for humiliating them.

At the Faire, these four cause some ruckus that are caught by the Mane 6, but things get hairy when AJ discovers a squadron of changelings in Flim Flam brothers' machine. Further, Queen Chrysalis appears and challenges Twilight Sparkle to a battle of magic. The distraction gives Iron Will enough time to grab the Crystal Heart. However, thanks to the Mane 6, Shining Armor, Princess Cadance, and other crystal ponies, they main characters are able to easily put an end to the villains' plans and capturing them. However, when they go to recover the Crystal Heart, they find Iron Will's bag has been switched. Chrysalis reveals this has all been a distraction for a larger purpose, and they race to the undefended palace.

Inside, the hooded pony, with the Crystal Heart, enters the dark chambers under the throne room. Inside Sombra's study, she reveals herself as Radiant Hope, the mare that had originally befriended Sombra before he turned evil, and was forced from the Crystal Empire before it was sealed away a thousand years ago. She finds Sombra's horn there, and the spirit of Sombra strong and resentful of her, but she states she is there for a purpose, having spent the centuries improving her healing magic. With a powerful burst, she is able to restore Sombra to his physical pony self. Sombra questions why Hope had returned, and she explains that after the disappearance of the Crystal Empire, she could not forget about him, and on returning to look for clues, discovered the Umbrum. The Umbrum invited her into their realm, who claimed to be the pixies that only she could see as a filly. They insisted Sombra was their champion and helped to teach her how to free him.

Aware that Hope has the Crystal Heart, Sombra races to the surface; Cadance witnesses this and quickly sends a message for help. Shining Armor tries to stop Sombra alone but is easily deflected, and Sombra releases the other villains, forcing the Mane 6 to battle them again. This time, the Mane 6 lack the upper hand, and aided by Sombra, they are quickly defeated and captured. Chrysalis thinks their victory is complete but Sombra knows help is on the way, and is not surprised when Princesses Celestia and Luna show up. They face Sombra and Chrysalis in battle, until Radiant Hope steps in and prevents them from hurting Sombra again, much to Celestia's shock. The pause gives Sombra the opportunity to unleash a powerful magic spell - the same one that turned Princess Amore into crystal. The Princesses are turned to stone much to Hope's horror.

Through Queen Chrysalis thinks they are free to take over the Crystal Empire, King Sombra reveals this was only one step of a plan to free the Umbrum. On hearing that name Queen Chrysalis panics, having encountered the Umbrum many centuries before, and tries to warn Sombra off this plan, as they won't let any love for her changeling army to feed off. Sombra refuses and returns to his study. Queen Chrysalis taunts the Mane 6 once again before abandoning the other antagonists, not wanting to be around when the Umbrum are freed. Meanwhile, the Mane 6 figure out how to help use the magic of friendship to free the spell blocking Twilight's magic from working, allowing them to get free.

Meanwhile, Hope realizes Sombra seems much more different than before, and Cadance, hiding in the castle, tries to comfort her. Hope insists the Umbrum are good and offers to take Cadance to their realm, where she had stayed for the last thousand years, their magic helping her to stay young. There, they meet the fairy-like creatures including Rabia, one that Hope had befriended, and they offer to take them to the Prison of Shadows. Rabia takes her to her cell to introduce them to her daughter, but too late they realize their fairy-like appearance is a front, as Cadance's magic reveals their true monstrous form, and the Umbrum quickly turn on the two. They reveal that they had created Sombra as a pony as to allow him to pass the barrier that prevents them from leaving, and that they were using Hope to be free and take over Equestria. Cadance and Hope make their escape back to the real world and then back into Sombra's study. Hope tries to warn Sombra from releasing the Umbrum from what she has just learned when Twilight and the others arrive. Twilight tries to stop Sombra with a powerful burst of magic, but Hope jumps in the way and absorbs the shot, severely injuring her. Sombra, furious at this, reveals that he's already unlocked the means to free the Umbrum, and releases the seal that lets them into the castle.

The Umbrum quickly secure the Crystal Empire, though not before Twilight's friends escape. The Umbrum set to tie up loose ends, having Sombra turn Shining Armor to stone like he did to Celestia and Luna, and then prepare to do the same to Twilight and Cadance, effectively removing the Royal Family from the Umbrum's path of conquest, though Twilight suggests doing it outside, near the pedestal for the Crystal Heart, in public view of the Crystal Ponies. As they are prepared, Sombra speaks to Hope and realizes she's bitterly angry with him, having forgone her destiny of being a princess, despite having him back, and tries to convince him to stop this.

They join the Umbrum outside, when the other Mane 6, gathering their various allies, launch an attack on the Umbrum. In the confusion, Hope suggests that instead of turning the remaining Princesses to stone, they shatter the Crystal Heart which she carries. The Umbrum agree, and give it to Sombra to destroy. When he looks at it, he doesn't see the same reflection as he had years ago, and realizes that he can change. Instead of destroying the Heart, he puts it back in place. The Heart's magic draws the Umbrum back to their realm and seals them away again, while also restoring Celestia and Luna to flesh and blood. As it happened before, the Heart also begins to draw Sombra as well, but he comes to a happy realization and shares his last moments with Hope. Hope tries desperately to restore him, and suddenly her power is joined by the four Princesses. The five of them are able to rid the Umbrum magic from Sombra, leaving him as a normal unicorn. Princess Celestia forgives him for what he's done since he saw the light and saved Equestria. Together, he and Radiant Hope set off to collect all the pieces of Princess Amore that he scattered around Equestria a thousand years ago as to return her to normal too.