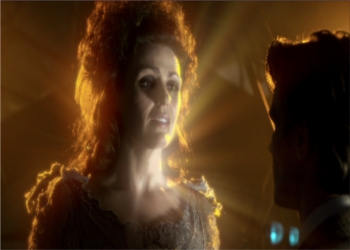 The TARDIS sure does clean up nicely...
"Hello. Hello, Doctor. It's so very, very nice to meet you."
— The TARDIS
Advertisement:

The one where the TARDIS is in the flesh, Ten's desktop is back, and Rory dies. Again. Except he didn't. Also the one where we all cry. Continuously... and very hard.

Despite this, it's not actually written by Steven Moffat, but is, in fact, written by Neil Gaiman. This episode won the 2011 Bradbury Award for Outstanding Dramatic Presentation — as well as a Hugo Award.

The TARDIS is in flight. There's a knock on the door, and when opened, a far-away cube of light is seen. When beckoned, it hits the Doctor in the chest, whizzes about the TARDIS's console room, nearly takes off Amy's head, and then actually comes to him. "I've got mail," the Doctor says with glee.

The hypercube is a form of communication for Time Lords. This one seems to come from one named the Corsair and the Doctor knows him / her quite well. They were friends, through many incarnations, and although even the Corsair's sex changed freely with new regenerations, one thing was always the same: the Corsair always got an Ouroboros tattoo on each new body. The small mail cube has that exact same mark.

The Doctor counts the Corsair as "one of the good ones". The message originates from "outside the universe", somewhere where the trio has never gone before. They follow the signal. As happened before when switching from the natural home-universe to a different one, the TARDIS loses power — but this time, it's due to a different cause than before. This time, the soul of the TARDIS has been transported into the body of a human woman called Idris. And the planetoid they've landed on seems to be a complete junkyard.

The travellers are greeted by two very raggedy old humanoids named Auntie and Uncle. They're closely followed by Nephew, a green-eyed lobotomised Ood. The TARDIS, in Idris' body, is delighted to see the Doctor, greets him with a "goodbye!", realises that that's wrong — time is all too linear in a humanoid body — and kisses him instead. The Doctor's a bit confused, especially when Auntie and Uncle warn him about contact with Idris, saying she's mad. And that she'll bite him. Which she promptly does. And she tells Rory what "petrichor" means, which he'll ask about soon enough in the future. But she has no idea how to behave around her "Thief", and before she knows it, she's carried off again by the humanoids.

The planetoid turns out to be accreted matter around a sentient lifeform, which glows green — like the eyes of the Ood Nephew. The planetoid's name is simply "House". The Doctor's single-minded purpose, though, is to find and help any possibly lost but still alive Time Lords that he senses nearby. Amy conjectures that he might just want to be forgiven for killing his race. The Doctor sends Amy and Rory back to the empty TARDIS husk for an errand, then locks the doors remotely as soon as they're inside.

He discovers a cupboard full of hypercubes in the junk yard, and they keep repeating emergency messages from a number of Time Lords. Auntie and Uncle approach, and the Doctor uncovers how House has been "repairing" them. They've been jigsawed together from bits and pieces that found their way into the "sink hole" where this "bubble universe" exists, on the outer-edge of the natural universe we commonly know the Doctor to travel in. Uncle literally has two left feet. Auntie has a big manly arm with the Corsair's tattoo on it. House, as it turns out, has been luring Time Lords to the planetoid since long before the Time War, and has trapped the souls of their TARDISes in humanoid bodies in order to safely consume the TARDIS husks. The accompanying Time Lords were, to him, simply spare parts for TARDIS soul receptacles.

In the meantime, Amy and Rory slowly realise that a green glow is suffusing the TARDIS. It starts to dematerialise and hurtle off in the direction of the bigger, energy-rich universe. House now has control of the TARDIS and is threatening to kill the inhabitants. It had initially planned to simply consume the TARDIS' artron energy, but now that it has learned that the Doctor is the last Time Lord and that no more TARDISes will ever arrive, it has decided to transfer itself to the TARDIS and escape through the rift. Rory quickly assesses that this being is in need of entertainment so won't kill them quickly, and argues this point in his half-hearted way of making a stand. House tells them to run, if they're so keen on being entertainment. They run through the TARDIS corridors while House makes them reenact the time skip scenes from Cube.

The Doctor finds Idris in a holding cell, and she tries to convey to him who she is. "We travel. I go ... VWORP ... VWORP." She explains that she's the one that stole him. He's her Doctor. While he tries to argue that he stole her, he releases her, and stands face-to-face with his ship. He awkwardly asks for her name. She assumes she's called "Sexy", since that's what he's always called her. She tries to get used to a physical body and linear time, with significant Time-Travel Tense Trouble and very little sense of what's yet to happen and what's already passed. They flirt and banter away until they, in non-linear flow of time fashion, figure out that the remains of all the Time Lords and TARDISes House has fed upon in its time has given them access to a means of escape. They hastily build a new TARDIS out of TARDIS parts, and Sexy Thing animates the remains.

Since House has raised them, the shields of the TARDIS husk need to be lowered so the Doctor and Sexy can materialise. Sexy sends a message meant for Amy, "the pretty one?", with the psychic password for the backup control-room: the one from the Russell T. Davies era. "The pretty one" turns out to be Rory, who uses her psychic message (including the thought of petrichor) to open the locks.

Amy and Rory nearly don't make it, though, since House has brought Nephew along for the ride and tries to use him to kill them. In the nick of time Nephew is killed, and the Doctor and Sexy are back inside the TARDIS husk.

Time is running out for the body of Idris, as it also was for Auntie and Uncle without constant repair by House. House is intent on killing again unless given a reason not to. The Doctor seems to be negotiating with House and giving helpful information on how to re-enter the larger universe without much cause for the trust he proclaims to have. As it turns out it was a ruse, since the Doctor knew deleting rooms (part of the required trickery for re-entry) transports any living entities inside them into the main control room. Idris' body dies while imparting some secret to Rory: "The only water in the forest is the river." The Doctor is happy, because that means that Sexy can recombine with the TARDIS hardware. He tells his "old girl" to finish House off — since he tried to consume something dimensionally transcendent, as her energy re-inhabits the physical TARDIS, it's now bigger than the thing which ate it, and House is destroyed.

Afterwards, the TARDIS reanimates Idris' body one last time in order to share a few tearful last words with her Doctor. Although she's going nowhere, she knows she'll never be able to speak to him again, so she says what she'd been wanting to say to him: "Hello, Doctor. It's so very, very nice to meet you."

Amy and Rory get a new bedroom. They hope for one without bunk beds this time, although the Doctor just loves the idea of a bed with a ladder. As they leave to check it out, the Doctor installs a security field around the matrix to prevent it from being compromised again, and gently talks to the TARDIS, not expecting an answer — only for a nearby lever to move on its own, sending the TARDIS to her next destination.