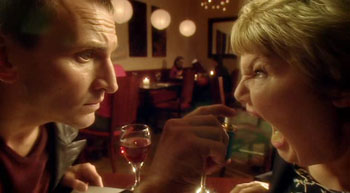 Breath spray. A genuine weapon against the Slitheen.
"What are you captain of? The innuendo squad?"note It's Jack. He probably is.
— Mickey (to Jack)
Advertisement:

The one where Rose breaks up with Mickey.

Six months later. The Doctor, Rose, and Jack pop back to 21st-century Cardiff, so that Rose can meet up with Mickey, the TARDIS can refuel from the Cardiff Rift, and mischief can generally be gotten into. Also, Jack isn't getting any from Rose, or from the Doctor, which annoys him and amuses everyone else. (But the Doctor merrily flirts with him, which annoys him even more.) Still, our three travellers have bonded together in a way that really irritates Mickey, who is getting a little sick of all the inside jokes and all the flirting with each other that the three of them can cook up.

Mickey's state of mind is understandable, but he's being a bit of a jerk about it — especially uncool since today, the usually dour Ninth Doctor is relaxed and grinning (probably still enjoying his victory from the last episode), and it's a beautiful sight to behold. But perhaps Mickey's not entirely at fault, because ultimately what really harshes the Doctor's mellow is the sight of Margaret the Slitheen (from "Aliens of London"/"World War Three") as the mayor of Cardiff.

She's presiding over the final stages of Cardiff's new nuclear power plant, a project she's been shepherding since its inception and which could not possibly go wrong. With all the safeguards and design reviews the power plant has had, for it to get this far it'd have to have been designed to fail! And indeed it is, as Margaret plans to use the inevitable explosion to propel her to anywhere in the universe that isn't Wales. Oh, and it's called "Blaidd Drwg"; Welsh for Bad Wolf. For the first time, the Doctor realises that those words are following them.

The gang chases Margaret, captures her and imprisons her in the TARDIS to await transportation to her home planet, where she's been convicted in absentia and faces the death penalty. She talks the Doctor into taking her out to dinner (using a pair of Jack's Time Agent handcuffs to prevent escape), where she alternates between trying to guilt-trip him and kill him.

She reveals that she's developed human feelings (which is true), that she's been trained to kill all her life (which is true) and that she's now trying to better herself and live in peace forever (which is a filthy lie). The Doctor defeats her by making her stare into the living core of the TARDIS, which causes her to revert to egg form. Problem solved!

Excuse me, who's in charge?

Captain Jack Harkness explains a plan to find Margaret Blaine otherwise known as Blon Fel-Fotch Passameer Day Slitheen, only for The Doctor to remind him that he's in charge. Turns out Jack's plan was a good plan after all.

Example of:
Still the Leader

Excuse me, who's in charge?

Captain Jack Harkness explains a plan to find Margaret Blaine otherwise known as Blon Fel-Fotch Passameer Day Slitheen, only for The Doctor to remind him that he's in charge. Turns out Jack's plan was a good plan after all.