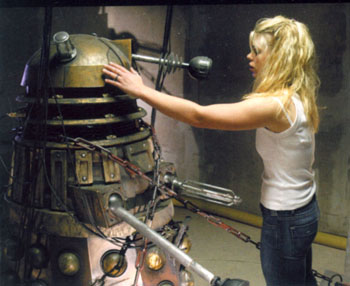 Biggest mistake of Rose's life in 3... 2... 1...
Rose: You don't have to do this any more. There must be something else, not just killing. What else is there? What do you want?
Dalek: I WANT... FREEDOM.
Advertisement:

The one with a Dalek... and one very angry post-war Doctor who thought they were all gone.

This episode marked the return of the eponymous villain to Doctor Who, and began the extremely brief tenure of the untrustworthy companion Adam Mitchell.

The episode was adapted by Robert Shearman from his Big Finish Doctor Who episode "Jubilee".

Shearman adapted the story again in 2021 into a Novelisation, which expands on many of the one-shot characters' backstories and explains why the episode's antagonists - Van Statten and the Dalek - are they way they are.

The Doctor and Rose arrive in 2012 Utah, in a museum of alien parts. As they discover when they are captured, they're in the Elaborate Underground Base of Henry van Statten, an American tycoon with way more money than sense. The pride of The Collector of the Strange's collection is a strange metal... droid... thing, that Mister Alien Expert just knows is sentient, but that he can't communicate with. So he locks the Doctor in there with it.

Even the usually unflappable Ninth Doctor freaks out when he sees... a Dalek. It's his first clue that the genocide that ended the Time War wasn't as complete as he'd thought. A tense standoff ensues, during which we see all the Doctor's rage and pain.

Anyway, van Statten kidnaps the Doctor for forcible induction into the Alien Museum. While he's indisposed, the Dalek tricks Rose into touching it, repairs itself using her time traveller DNA, and escapes from its holding cell to wreak some serious havoc. The Dalek is horrified to learn the Doctor was right, it is the last of its kind.

Rose and Adam try to rejoin the Doctor (who has convinced van Statten to let him go try to save everyone's lives), but are separated by a steel blast door. And Rose is on the wrong side of it. An even tenser standoff ensues, while the Doctor watches over CCTV, but Rose's DNA — transferred to the Dalek when she touched it — is messing with the Dalek's xenophobic sensibilities, and it suffers an identity crisis instead of just killing Rose. The Dalek nearly kills a panicking van Statten, but Rose stops it, and it decides it wants to leave. She goes with it to the top floor of the bunker and it shoots a hole in the ceiling, letting in the sunlight. It opens its shell to feel the warmth of the sun. The Doctor arrives at this point, wielding a BFG and telling Rose to get out of the way. She refuses and calls him out on trying to kill it when "all it wants" is the sunlight. The Dalek learns Rose touching it has combined its DNA with hers, making it "impure". It decides it wants to die rather than live as a new lifeform, and orders Rose to tell it to self-destruct. She reluctantly does so, and it kills itself.

Meanwhile, van Statten's assistant, disgusted by the death that has occurred, has his guards seize him and orders them to wipe his memory and dump him on the side of the road in "San Diego, Seattle... some place beginning with 'S'", Ironic Echoing him when he'd earlier decided another assistant had failed him.

Rose and the Doctor get ready to leave, followed by Adam, who doesn't understand why they're going into a box when the bunker is going to be filled with cement, but Rose has persuaded the Doctor to let him come. He follows them into the TARDIS.

The Dalek, who goes through a traumatic roller coaster of discovering morality, discovering emotions beyond hate and fear, and being unable to kill anything that it hates, begs Rose to make it commit suicide as it watches the sunlight, unable to do anything. Rose complies. It gives one last, rather morose-sounding "Exterminate!" before blowing itself up out of self-loathing.

The Dalek, who goes through a traumatic roller coaster of discovering morality, discovering emotions beyond hate and fear, and being unable to kill anything that it hates, begs Rose to make it commit suicide as it watches the sunlight, unable to do anything. Rose complies. It gives one last, rather morose-sounding "Exterminate!" before blowing itself up out of self-loathing.