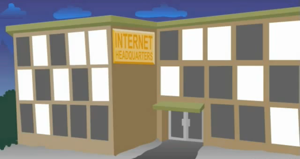 In Real Life, the Internet is a network of networks. While a few aspects of it are centralized (for instance, the allocation of blocks of IP addresses, the top-level parts of the DNS, and the allocation of Autonomous System numbersnote all of which admittedly the internet as it is known today could not operate without, but it's still a far cry from this trope), it mostly works in a decentralized fashion, where each system operates independently and their interconnections are based on bilateral agreements and common protocols. There is no central company, organization, or government agency which controls or operates the Internet as a whole.

In fiction, it does not have to work that way.

Instead of the decentralized Internet we are used to, the network all the characters interact with is owned and/or controlled by a single organization. This organization can be a powerful antagonist if the protagonists are hackers or are trying to uncover some secret it wants to keep hidden. Often, the Internet Incorporated is the creator of the Applied Phlebotinum which powers the Cyberspace the characters use — or is the one who stole it from its creators.

Note that this isn't technically impossible for fiction set in an alternate universe, but in Real Life, it's not true. Although, the increasing corporate consolidation of Internet services and infrastructure during The New '10s and beyond have made this closer to being Truth in Television.