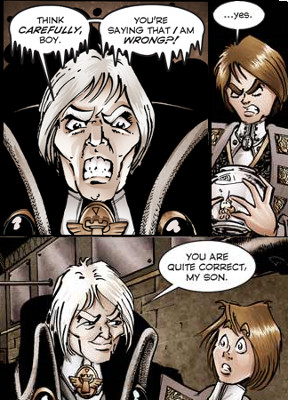 Another test.
Harry Dresden: Servant, I don't like that word. I suggest that you consider where you stand and choose a different term. My Queen. And you will be gentle with that girl, or so help me I will make you regret it.
Mab: Finally, a Knight worth the trouble.
— Cold Days
Advertisement:

The badass has achieved high rank: king, CEO, crimelord, whatever. He's done so by sticking up for himself and what he believes in, and never taking abuse from anyone. He's pretty settled in when he notices a problem: he's surrounded by gutless yes men. They're weak. They crawl before him. They can't possibly take over his role if he were to step down.

Except that one guy. Who hates his guts. And quite possibly has tried to kill him.

It doesn't have to go as far as hate and murder. Just being willing to defy, correct, and generally stand up to the power figure can qualify.

Since standing up to someone when you're supposed to is easy, this may involve a Secret Test of Character. But the strongest evidence is when the rebellion happens entirely unprompted.

See also Hire the Critic, The Consigliere, and Honest Advisor. Compare The Puppet Cuts His Strings, for when the "inheritor" (in whatever form) actively escapes control.