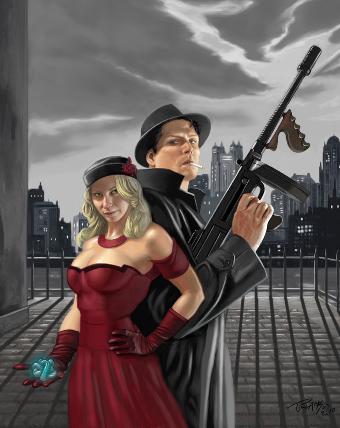 The Grimnoir Chronicles is an Alternate History fantasy taking place in the early 1930s. Sometime in the 1800s magic appeared in the world, giving a small fraction of the population (the Actives) one of a standard set of super-powers, such as fire, healing, and teleporting. Just like his other series, Larry Correia provides some of the best action scenes out there, fueled by pure distilled Rule of Cool. A gravity-controlling private eye teams up with a guy who can walk through walls to fight a bulletproof samurai. A teleporting ninja with a katana goes up against a teleporting Oklahoma girl with a shotgun. Bullets fly, demons are summoned, and stuff blows up.

The first in the series is Hard Magic (released May 3 2011). After Jake Sullivan fails to bring in his former Love Interest for murder, he makes some inquiries and finds out that things aren't what they seem. He's soon caught up with a secret society (the Grimnoir) sworn to stop the Japanese Imperium, led by the indestructible Chairman Tokugawa, from taking over the world. At the same time, an Okie named Faye witnesses the murder of her adoptive grandfather at the hands of a mysterious one-eyed man. His dying command is for her to protect a strange mechanical device, designed by someone named Tesla.

The sequel Spellbound is out as of November 1 2011. It follows up on some of the sequel bait from the first book — such as the entity stated to be pursuing The Power itself.

The third book, Warbound was released in August 2013.

This work uses the following tropes: