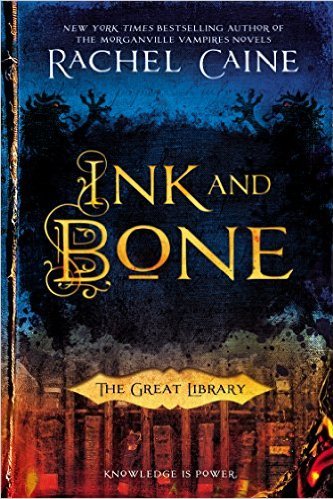 A series by Rachel Caine, set in an Alternate History in which the Library of Alexandria never burned down and instead spawned daughter libraries called Serapeums all over the globe, creating the most powerful institution in the world. In a time where any book from the Library can be "mirrored" into a blank for those who have the ability to pay for it, ownership of "originals" is illegal and punishable by fines, imprisonment, or worse.

Jess Brightwell, son of a powerful book smuggler, is sent to Alexandria to become a Scholar (and to spy for his family). There he'll meet fellow postulants from across the globe, train under cruel teacher Wolfe, discover a knack for working with the magical artifacts the Library provides to capture books and criminals alike—and uncover some of the darkest secrets the Library has to offer.

The first book in the series is Ink and Bone, released in 2015.

The second book, Paper and Fire, was released in 2016.

The third book, Ash and Quill was released in 2017.

The fourth book, Smoke and Iron was released in 2018.

The fifth book, Sword and Pen was released in 2019.

In addition, Rachael Caine is in the process of publishing two prequel eBooks for free on Wattpad.com

The Great Library contains examples of: