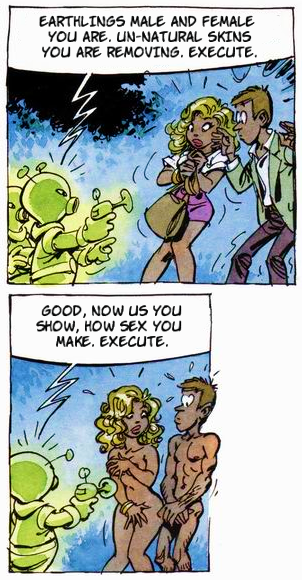 Two people are coerced into sex by a third party. This can be part of a Sadistic Choice — wherein the villain will threaten one or both of the victims with bodily harm, unless the two cooperate — or it can be under pure coercion from one who is more powerful or manipulative.

This is handy for a villain who doesn't like to get his hands dirty. It also lets him use his victims against each other — making it very efficient. Maybe watching gets him turned on. So maybe he does join in a little later.

An extra dimension of angst can be added when two characters have deep feelings for each other, but those feelings are not sexual in nature (e.g., friendship or platonic love); alternatively, they may have latent romantic feelings, but exhibition is not how they would have wanted to express it. Judging by the examples below, it's also disturbingly common for the pairing to be incestuous.

It can be heartwrenching, especially when the victims struggle to comfort each other in the midst of the (usually) mutually traumatic ordeal, or suffer the perversion of their honest affection. It can also be an Excuse Plot for pointless titillation.

Compare/Contrast Sex by Proxy. One might expect Aliens Made Them Do It to be the Sci Fi counterpart, but in fact that trope is much Lighter and Softer, often played for laughs or a light-hearted Ship Tease.