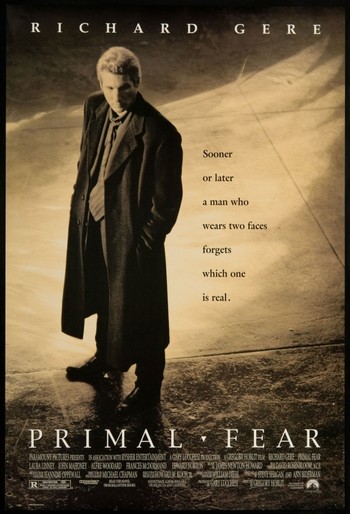 Not intended to be a lawyer joke.
Reporter: Marty, you are a master of putting the victim on trial to help your own client. That is going to be very difficult in this case.
Marty: The victim in this case is my client.
Advertisement:

Primal Fear is a 1996 crime drama, directed by Gregory Hoblit and based on a novel of the same name by William Diehl.

Amoral Attorney Martin Vail (Richard Gere) defends an altar boy, Aaron Stampler (Edward Norton), accused of the brutal murder of an archbishop. Vail's ex-girlfriend, Janet Venable (Laura Linney), is prosecuting the case. At first only interested in the publicity of the case, Vail soon discovers that there is more to the case than meets the eye.

The movie proved to be Norton's Star-Making Role—in his feature film debut, no less.

Not to be confused with the trope of the same name, with which it has little to do.

Also, as the movie is a series of Reveals, spoilers will be problematic.

Warning: Expect every example to be a spoiler for something. Proceed at your own risk.