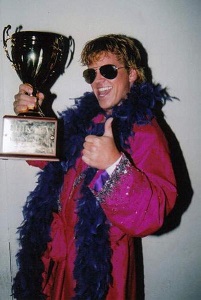 Alexander K. Whybrow (February 18, 1981 – April 11, 2011) was an American Professional Wrestler and manager from Chicago as Larry Sweeney. He debuted in 2000 and competed in various independent promotions while also training at various schools, including that of "Playboy" Buddy Rose in Portland, OR. He officially launched his career in 2004 after training at the CHIKARA Wrestle Factory. He is best known for his work in CHIKARA and Ring of Honor, particularly as the manager for, respectively, Sweet 'n' Sour International and Sweet 'n' Sour Inc. Over his career, he was the second-ever CHIKARA Young Lions Cup Champion, a 2x IWC Super Indy Champion

, a title he introduced. His work as a manager in ROH earned him The Wrestling Observer Newsletter's "Best Non-Wrestler" award for 2007 and 2008.

Sadly, after years of struggling with Bipolar Disorder, he was found dead on April 11, 2011, from suicide via hanging himself from the turnbuckles at a Lake Charles, Louisiana wrestling school. CHIKARA named the tournament to crown the first ever CHIKARA Grand Champion

the "12 Large Summit," In Memoriam, after his Catchphrase.