Wrestling / The Kings of Wrestling 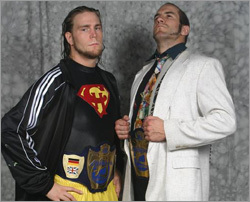 The Kings of Wrestling were a Professional Wrestling Tag Team/Power Stable that started in CHIKARA in 2005 and which found success there, in Ring of Honor, CZW and elsewhere for some five years. It started when Chris Hero turned heel on Mike Quackenbush during the SuperFriends-Claudio Castagnoli/Arik Cannon final at CHIKARA Tag World Grand Prix 2005 Night III, February 20, 2005. A year later, Hero and Castagnoli won the 2006 TWGP and became the inaugural CHIKARA Campeones de Parejas

. Over the course of the group's existence, Hero and Castagnoli would win the ROH World Tag Team Titles

once, and KOW members Maxime Boyer and Chuck Taylor would both hold the CHIKARA Young Lions Cup

, and, in 2010, The Wrestling Observer Newsletter named Hero and Castagnoli "Tag Team of the Year."