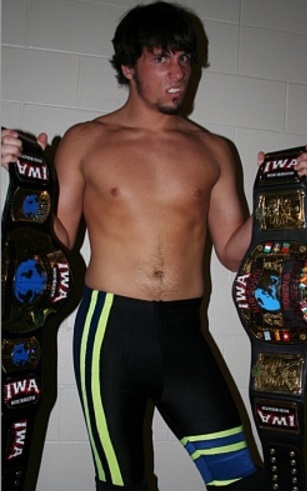 . Yes.
"LET'S GO CHUCK TAYLOR YOU'RE THE BEST WRESTLER IN THE WORLD YOU'RE IN WAY BETTER SHAPE THAN TYLER BLACK!"

Dustin Lee Howard (born Aprill 22, 1986) is an American Professional Wrestler from Murray, KY as Chuck Taylor. He debuted in 2002 at the age of 15 but had to wrestle in Tennessee due to being too young to compete in Kentucky. He has wrestled for CHIKARA, CZW, Ring of Honor, IWA Mid-South, All Elite Wrestling, Pro Wrestling Guerrilla, Dragon Gate USA, and numerous other promotions.

Among his in-ring achievements, he is also a former CHIKARA Young Lions Cup Champion

He has nothing to do with that brand of sneakers

that A.J. Lee wears or any of those other Chuck Taylors

"LET'S GO CHUCK TAYLOR YOU'RE THE BEST TROPER IN THE WORLD YOU'RE IN WAY BETTER SHAPE THAN TYLER BLACK!":