Fighting in the Playground 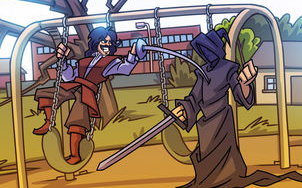 Fighting by the swings in the park with swords. Seems legit.
"Ah, at last! A worthy place to call our battlefield!"
— Paw, Suburban Knights
Advertisement:

There are thousands of places where people can go and battle. Whether it be up on the roof, inside an old warehouse or any place that looks dramatic. But what can they do when these places are unavailable or out of reach?

Well, they'll have to make do with what they can find, no matter how silly it looks.

A normal fight in the woods can result in being taken to a nearby local park where children usually play. It's rather unlikely that children are around at the time or people passing by. Expect the people taking part in this fight to be either grown adults or creatures from another planet... or someone who should know better. Some instances can be children as well, but the scuffle might not always be childlike.

Most cases, the fighters will be using war weaponry like swords and guns, or they'll just use Improv Fu. Expect to see things such as fighting on the spinning roundabout, a quick escape down a slide, and/or someone claiming empowerment on the bridge above the monkey-bars. If they are ever caught by a passer-by, said passer-by might back away slowly or not react; it's could also be a child that is immediately shushed by their oblivious parent, but if an adult is the first one to see, they might try to distract the child or Cover Innocent Eyes and Ears.

Hlaf of the fellowship fight the Cloaks on a "worthy place".

Hlaf of the fellowship fight the Cloaks on a "worthy place".