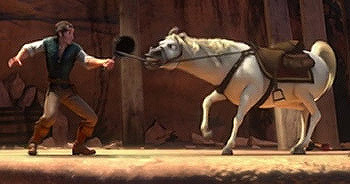 A man with a frying pan versus a horse with a shortsword. Rest assured, It Makes Sense in Context.
"You should know that this is the strangest thing I have ever done!"
— Flynn Rider, Tangled, describing the picture to the right
Advertisement:

This is a fight that is made interesting by a special location and/or unusual circumstances. Both parties try to use these to their advantage and it looks cool too, so it's a visual and tactical plus for the Spectacle.

The opponent's unusual strengths, weaknesses, or abilities can also make a fight special. May involve Dangerous Terrain. May involve odd or Improvised Weapons on one or both sides.

Subtropes of the Interesting Situation Duel include:

Bart and Skinner battle across Springfield with sticks topped with each other's food allergies, set to Duel of the Fates.

Bart and Skinner battle across Springfield with sticks topped with each other's food allergies, set to Duel of the Fates.