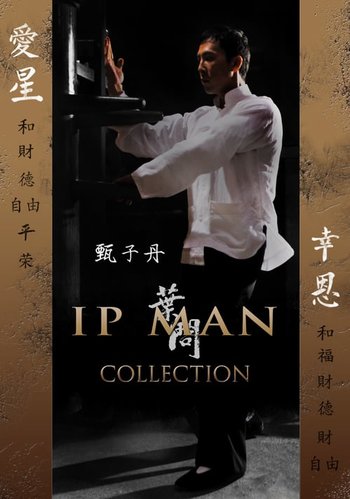 If you are looking for an in-depth biography of the master of Bruce Lee, you are looking in the wrong place. If you are looking for great martial arts flicks with exceedingly tight choreography and likeable characters, you are in the right spot. The series is credited for re-popularizing the appeal and uptake of Wing Chun, as it prominently features that traditional Southern Chinese style of kung fu and often confronts it with other martial arts, including Western boxing.

The main films were directed by Wilson Yip, and the spinoff was directed by Yuen Woo-Ping. The series includes:

Herman Yau's 2010 film The Legend is Born: Ip Man sometimes gets lumped into this franchise as a "prequel" of sorts, due to the reuse of a number of actors from the first two films, despite not being part of it and not being produced by the same company. That film got a sequel, Ip Man: The Final Fight (2013, also directed by Herman Yau). Other works about the character that don't have ties to the Wilson Yip/Donnie Yen series include The Grandmaster (2012, directed by Wong Kar-wai) and the 2013 Ip Man TV series (which had Wilson Yip as artistic consultant nonetheless).

Note for Western readers: The character name is rendered in traditional Chinese style, so "Ip" is the surname. Additionally, it is not a superhero name. Please do not be confused.

Tropes for the series as a whole: