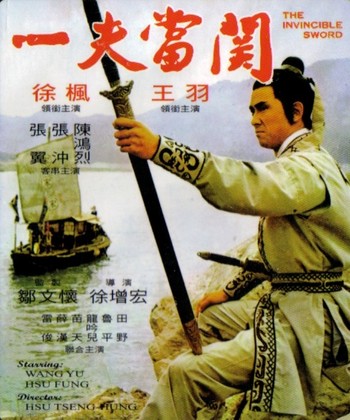 Killing is as easy as breathing. Especially if you're Jimmy Wang-yu.
Advertisement:

When Minister Yue-fei, a heroic general loyal to the imperial court, is framed and arrested by Lord Chin-kuei, who intends to overthrow the Dynasty and rule the kingdom with an iron fist, a band of warriors and patriots, led by Yu-feng (Jimmy) and Sima Chang-hung (Chang) attempts to mount a daring rescue. But after the rescue attempts ends in failure resulting in Yu-feng being the only survivor, he gets rescued by the Song sisters, a pair of travelling acrobats, who are sympathetic to his cause and decides to assist Yu-feng to prevent the kingdom from falling under the rule of tyranny.

It's also the movie for you, if you're interested in seeing a lone dude killing 286 people onscreen in 90 minutes

The Invincible Sword includes examples of: