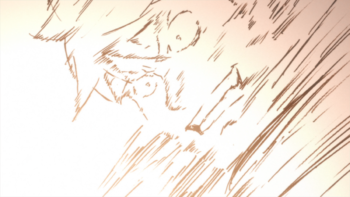 "So this is the Power of the Spiral?
Not bad, not bad at all."
Advertisement:

Some characters Face Death with Dignity... while others see it as the ultimate opportunity for Gallows Humour and they smirk. Or they smile or laugh ironically.

It happens that these characters die with spiteful grins, smirks and laughs, showing off to their opponents that somehow they still have the upper hand. Perhaps it's the way the character shows their utter contempt to the enemies who defeated them. They might believe they're winning despite dying, or perhaps they think they won and screwed their enemies over. Or perhaps they're planning on sinking them and taking them down with them. Unredeemed villains might die this way, too, so their unsettling grin will continue to terrify the heroes long after they're gone. It usually follows My Death Is Just the Beginning, Defiant to the End, or I Die Free. May also be because their Thanatos Gambit just effectively succeeded.

Grin of Audacity, Psychotic Smirk and Slasher Smile may be related.

Contrast Go Out with a Smile for tearful, bittersweet, genuine smiles, usually directed at their loved ones or to indicate that the character dies in peace.

Compare/Contrast Die Laughing for dissonant, mad laughter for characters who find their death hilarious, or who simply happened to hear a really funny joke just before they kicked the bucket.

Beware of unmarked spoilers, since this is a Death Trope.

Dies after being shot by Elektra in The World Is Not Enough, but not before using a Last Breath Bullet to shoot out one of the manacles securing Bond to Elektra's torture chair and free him.

Dies after being shot by Elektra in The World Is Not Enough, but not before using a Last Breath Bullet to shoot out one of the manacles securing Bond to Elektra's torture chair and free him.