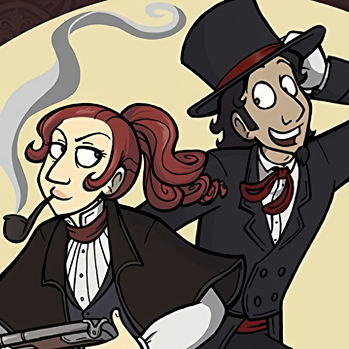 is a webcomic by Kate Ashwin, the artist behind the now completed webcomic Darken. Many important events take place or have their origin in the eponymous city of Widdershins, where magic is easier to perform than anywhere else.

Magic in this webcomic is based off memorization of summoning words and circles as well as human emotion. See, wizards can summon a spirit of emotion to do things like cause trains to run faster by imbuing the tracks with impatience

. If a wizard messes up their spell, they create a "buggerup" (the common term) or a "malfom" (the educated term), a spirit who is basically a personfication of an emotion. As the seven deadly sins are emotions, they exist in this universe...

The first story, "Sleight of Hand," follows Sidney Malik, a failed magician and wizard who is cursed with a kind of magical kleptomania which results in his expulsion from university. While struggling to find a job, he ends up caught up in professional artefact-hunter Harriet ("Harry") Barber's latest quest: finding the Mark of Thieves.

The second story, "No Rest for the Wicked," deals with Jack O'Malley (who is frequently known by "Mal" and can see spirits) and his friend Heinrich Wolfe. To avoid jail, they end up working for the city helping civil servant and wizard Ben Thackery in locating and banishing malforms, or failed summonings.

The third story, "Vanishing Act," returns to Sidney and Harry as they investigate the disappearance of an old friend of Sidney's, and run afoul of someone from Harry's history as well.

The fourth story, "Piece of Cake," follows Alexa King, a baker from the present day who visits the Gula Hotel in Widdershins for a baking competition and runs afoul of some old magic.

The fifth story, "Green-Eyed Monster", shows us how Jack/Mal and Wolfe first met, and introduces Wolfe's old friend in the army, with whom he had a falling out in the same events that brought him and Jack together.

Story six, "Find the Lady," brings the Barber clan together for a rousing tale of Grandpa Henry and Grandma Isabelle's early exploits, straight from the retired adventurers themselves.

Story seven, "Curtain Call," brings the two main groups of protagonists together as the growing threat of the Deadlies (AKA seven deadly sins) is about to break out into full-fledged magical disaster.

Story eight, "Hangman's Knot", follows a new cast of characters. A young man named Vincent "Knotty" Knott is trying to prove that student wizard Will Sharpe did not commit the crime he is going to be hanged for in the morning. Knott's friend Eliza, who loves getting to the bottom of a good mystery, gets caught up in helping.

Story nine, "Witch Hunt", brings together the new and old characters as the repercussions of the end of story seven are resolved.

The author summarizes it thus:

"Widdershins is an adventure/comedy comic set in 1830s England, with a dash of magic. It's made up of short stories, some of which will be self-contained, others not so much.."

This webcomic contains example of